God Perhaps Sees Error of His Ways after that Last Fiasco, Scales Back Next Divine Executive Appointment to State Level 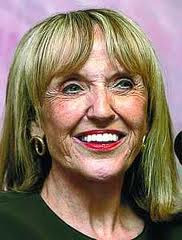 Aaaaaaand here we go again with the chosen one. No, not the "Chosen One" tag derisively hung on Barack Obama by detractors who think he's the Antichrist, but Jan Brewer's actual belief that God got distracted from the pennant race long enough to reach down into Arizona to pluck her from the obscurity of the lieutenant governorship and install her as the our ruler. Stop me if you've heard this one before.

Gov. Jan Brewer said Wednesday that she believes "God has placed me in this powerful position of Arizona's governor to help guide our state through the difficulty that we are currently facing."

Delightful, but harmless, no? I mean, as long it's limited to delusions of grandeur and doesn't intrude on state business, no big deal. Because it doesn't, right?

Brewer detailed to a group of pastors of the Missouri Synod of the Lutheran Church how she relies on her faith and in prayer to deal with many of the issues she faces as the state's chief executive. Brewer also said there are times when, during a meeting with staffers, one will suggest praying about an issue.

"And we stop, and we take that time, and we pray about it," Brewer, a Missouri Synod-Lutheran herself, told the group meeting here. "And it does make a difference."

Brewer goes on to assure us that she recognizes the dangers in tying personal religious beliefs too intimately to the business of governing, or, as she puts it, the belief that "we can convert God's truth into a political platform, a set of political issues, and that there is 'God's way' in our politics. I don't believe that for a moment." Okay, fair enough, and can I just get a whew from the non-Missouri Synod congregation on that one? Unfortunately, she follows it up with this little gem:

Brewer, in response to audience questions, said she has been "blessed because so many people of great faith" have helped her with their prayers.

"And that has caused me, of course, to be grateful that we are a country of Christianity," she said.

"I don't think under the circumstances that anybody's in the position of living at this turbulent time, these terrible, critical times of our nation, can possibly get through without asking for help and guidance from Jesus Christ and from God," the governor told the ministers.

Granted, she was speaking to a group of Lutheran ministers, not giving a State of the State address. But. Please. It wasn't exactly a whisper in the confessional, even if Lutherans had such things, which they don't. They did have reporters with microphones, and despite that, in one fell swoop Brewer simultaneously promulgated the "Christian nation" falsehood and pooh-poohed everything falling outside the box labeled "Christianity." After quite openly proclaiming that state business is regularly guided by a Christian prayer circle.

The former governor, now HHS chief Janet Napolitano, was an observant Methodist who nonetheless elevated secular notions of civil rights above theology and managed to keep the rabidly conservative state legislature at bay. Now God's Own Jan, about whom exactly zero rumors of lesbianism have swirled, has set the governor's office on a Godly and explicitly Christian path. And her greatest hits to date include signing into law a bill that severely restricts reproductive freedom (see yesterday's post) and eliminating benefits for the domestic partners of state employees, which affects a few disabled adult dependents but overwhelmingly targets fornicatin' straight couples livin' in sin and, of course, the gays. And the kids of all the people involved.

But don't worry; there's one realm Brewer not only keeps her religion's teaching firmly out of, but also claims to not even know what that teaching might be.

Brewer, facing a question about illegal immigration, said she does not know the stance of her church. But she said her views are governed by her elected position.

"As the governor of Arizona, I stand on the law that they're illegal, they ought not to be here," she said.

Seriously, what were you expecting?

Welcome to Arizona. Hope you brought your cross.