There are parts of Indiana I absolutely love, places my heart goes back to over and over again: South Bend, where I spent the majority of my adolescence, and McCormick's Creek, a state park near Bloomington where I spent some of the best individual weeks of my life. 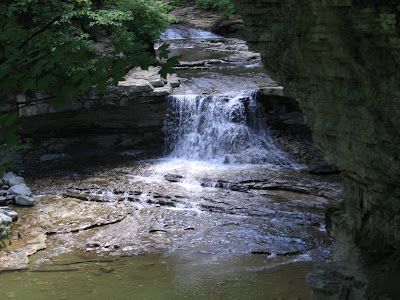 You can keep the rest of the state.

Opponents of same-sex marriage said today that they would try again to amend Indiana’s constitution to prohibit gay unions, this time with a re-worded amendment they hope will answer critics’ concerns.

In previous legislative sessions, the proposed amendment stated: “Marriage in Indiana consists only of the union of one man and one woman. This constitution or any other Indiana law may not be construed to require that the marital status or the legal incidents of marriage be conferred upon unmarried couples or groups.

Turner said that the changed language is meant to be clearer. It would not bar domestic partnerships, he said, but would bar civil unions.

It is uncertain whether the measure will make it out of the legislature and onto the ballot, since several key legislators--unlike their colleagues in Arizona--understand that marriage equality is already banned by statute, making an amendment redundant. The proposed amendment's biggest obstacle is one Patrick Bauer, D-South Bend, the speaker of the Indiana House. I went to school at various times with two different guys named Patrick Bauer, but I don't think either is this guy. In any event, I'm at least gratified to see a South Bend Democrat stand up for what's right.

I am not the least bit gratified to hear Tony Perkins shilling for the amendment on behalf of the Indiana Family Research Institute, as reported over on the Blend. This is the organization, remember, that had Tony Dungy shilling for contributions at a protect-marriage-dinner shortly after the Colts won the Super Bowl, and which is repeating the lie that the amendment is only about sacred holy fucking matrimony, not not not civil unions. Despite both of the amendment's sponsors in the state legislature clearly stating that civil unions are in their sights as well.

Side note: fundamentalist Christian apologists argue that the commandment forbidding false witness is not, after all, an injunction against lying in general, but specifically directed at witnesses giving false testimony in legal proceedings against other Hebrews. So modern Christians are free to lie, lie, lie their pants off when it's convenient for stomping on gay folks, a giant get out of jail free card, immunity in the big Jesus elimination challenge they're more than happy to nominate us for.

Too much Top Chef, Boltgirl? Possibly.

Whatevs. The callus is too thick for these things to sting much any more. McCormick's Creek and the Grotto at Notre Dame still call my heart. My head, meanwhile, says meh, you still live in Arizona.