Let me preface by saying that rubber fake testicles hanging off the backs of trucks, especially when they cost in the neighborhood of twenty bucks, may be the most singular means of communicating "Hello, I'm a giant douche" the world has yet seen, and their squickiness is trumped only by the fact that they apparently were invented by a 70-year-old guy, although googling "truck nuts inventor" isn't giving me a reliable source for that half memory.

So yeah, I had thought they were the stupidest thing I had ever seen. Then I went to K-Mart (do. not. ask.) and saw this in the parking lot. 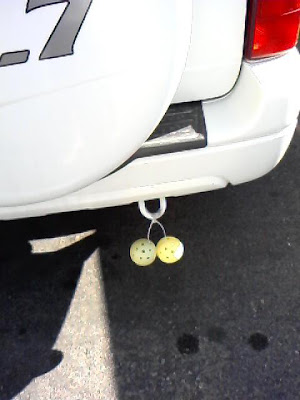 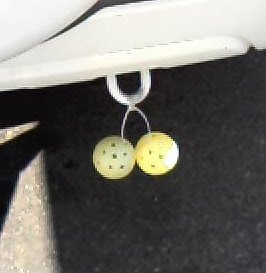 Wiffle balls. On a zip-tie. I salute you, Mr. Suzuki X-7 driver from Texas, for your refusal to let your dumbassery wilt in the face of recession. You understand the importance of faux genitalia on your vehicle, and if you can't buy the powder-coated aluminum version, you will just slap these homemade babies way off-center on your tow hook and say to hell with anyone who thinks that might maybe make you ever so slightly more of a douchebag than the ninety million other dumbasses with anatomically correct, if oversized, fake nuts on their trucks. Well played, sir. Well played.

Mud-flap silhouettes will undoubtedly have to be cut out of 7-11 hot dog wrappers starting any day now. Fix the economy, Barack. We can't take much more of this.