Another Kind of Migrant

I can't tell you how many times I've heard anti-immigrant (read: anti-Mexican) people in Arizona complain about the immigrants' refusal to assimilate into mainstream (read: white) America. These people, they come into our country and still speak Spanish and wave their Mexican flags and eat at taco trucks and play their goddamn mariachi music full blast and have fucking picnics in graveyards and this is AMERICA goddammit so why don't they act like Americans?

I'm not from here either. Well, I am from the US, but I'm not from Arizona. I'm from the midwest, Illinois and Indiana, mostly the greater Chicago area. I spent my middle school and high school years in South Bend, Indiana, and grew up with the grandkids of Polish immigrants. When the Poles came over, they built their own parish church a block away from the existing church so they wouldn't have to go to mass with all those annoying Irish people, lived in their own neighborhood, and ran their own grocery stores and butchers, some of which were still operational enough in 1984 that if you went in and asked the butcher in Polish, you could get the quart of duck blood you wanted for soup. Now those folks have retired to Phoenix and brought as much of the midwest with them as they could cram into their Winnebagos, but since they're saying ya hey dere and flying a Packers windsock instead of si se puede and El Tricolor, no one notices a thing.

My midwestern grandparents spend the winters in one of these Phoenix-area giant senior citizens' communities, surrounded by fellow snowbirds from Illinois, Iowa, Minnesota, Wisconsin. They frequent the Hoosier Cafe, decorated with Indiana University and Purdue memorabilia, and another cafe that is named Red Mountain but might was well be U.P Michigan Central, this one plastered with Packers, Vikings, and Proud to Be a Yooper flags, and order coffee from waitresses with unmistakable upper midwest accents and look at the Michigan license plates on the wall and wonder why the Mexicans won't just try to fit in.

Meanwhile, fifteen years and counting in the desert and my wardrobe still consists mostly of t-shirts proclaiming my allegiance to various Chicago sports teams and Notre Dame. My license plate and the Cubs magnet on the back of my car scream Chicago. When I go hiking here I seek out running streamcourses that are lined with trees, and in the springtime long to hit the higher elevations of the Catalinas just so I can see some familiar wild geraniums and smell damp rock and feel, for a moment, that I'm back home. The pens on my office desk sit in an ancient beer cup from the Taste of Chicago. Steve Goodman, rest his soul, headlines my iPod; WGN News at Nine is not an infrequent visitor to my living room; about once a week you can find me clutching an Old Style at Rocco's Little Chicago in the booth under the CTA centennial poster. 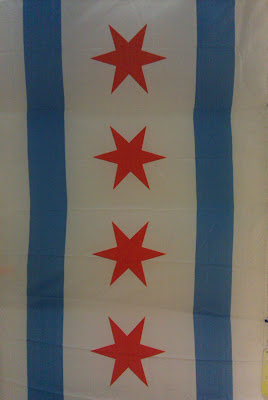 In short, I in many ways--unconscious, conscious, sometimes downright gleeful--have stayed within the cultural milieu I grew up in instead of completely assimilating into my new home. My right-wing fellow Arizonans probably just haven't really noticed, or, if they have, haven't taken offense at my Loop-centric tastes because they aren't terribly far afield from their own. I'm allowed my trappings of home because home's on the right side of the Rio Grande. The Mexicans who want to do the same? My stars, what a terrible affront to Arizona sensibilities.