It is World Cup time, people.


La Familia Bolt hit Trident Bar & Grill this morning at 6:20 to secure a table and get a breakfast order in before the rush. Which was a good thing, since the place was packed by kickoff. 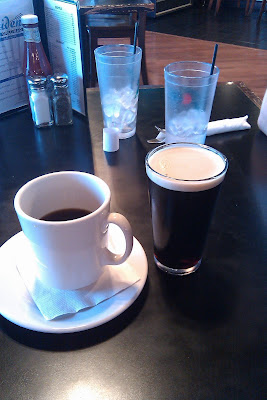 Breakfast of champions. Eggs may also have been involved.

The first three minutes had me expecting an ocho-zero blowout for Mexico, but the Bufana Bufana shook off the early pressure--thanks in large part to their 22-year-old keeper, who stuffed one shot from a yard away and brilliantly parried a long-distance strike--and built a steady head of momentum on midfield possession leading to clever through balls. South Africa scored first on an excellent counterattack and crazy-angled shot to the upper corner, far post, and then Mexico put in 90-year-old Cuatehmoc Blanco and we figured it was all over, but then four guys busted into the six yard box uncovered and there wasn't much the keeper could do about it. Game 1 final: 1-1.

Email ThisBlogThis!Share to TwitterShare to FacebookShare to Pinterest
Labels: soccer