While I Was Away

I swear, you can't leave this state on its own for more than 24 hours without someone forgetting to shut the door and letting the stupid in. 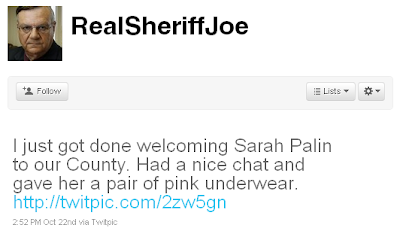 To be fair, there was already a shit-ton of stupid here (Exhibit #1: RealSheriffJoe). Palin's Maricopa County-issued pink panties are just the stupid cherry on the stupid cake.

In other news, it turns out that one of the judges who will be deciding whether Arizona can go ahead and start enforcing the odious SB1070 papers-please law was himself almost deported back in the 1950s when he was a resident alien. Turns out it was just a small series of mistakes on the then-college student future judge's part compounded by an INS officer, but an appeals board sorted it all out and the future judge eventually attained citizenship. Of course, the Daily Star's usual commenting pack of reading comprehension champions are convinced that the judge is a Cuban (Spaniard, actually) draft dodger (he wasn't) appointed by Clinton (by W, actually) who needs to recuse himself right away because he cannot possibly be neutral in any immigration matter now.

This is the same pack that howled about Sonia Sotomayor potentially deciding cases involving Latinas, wise or dull, and about big gay judge Vaughn Walker nixing Prop 8. Corporate lawyer John Roberts siding with corporations in Citizens United, though, was simply jurisprudence. The pack might not have agreed, but it was the decision they took issue with, not the perception that the background of the person making it had any influence on it whatsoever.

What will Arizona do today? I shudder in anticipation.

Email ThisBlogThis!Share to TwitterShare to FacebookShare to Pinterest
Labels: arizona