US Soccer is Wearing on Boltgirl's Very Last Nerve

CONCACAF qualifying for the 2011 World Cup is underway, and in a surprise to no one, we beat Haiti again. Haiti have never scored against us, at least on the women's side, and tonight the US poured in five goals that could easily have been ten. That's fine; I'm actually glad that the score stayed both in single digits and in the bottom half of one through ten, since blowouts don't do anything for either side, nor for the game in general. My problem is with this: 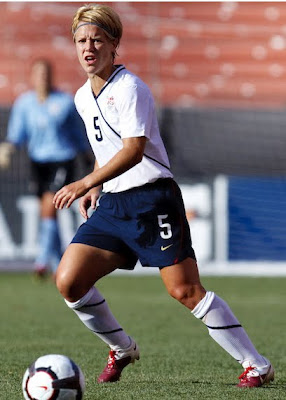 Lori Lindsay goes to the spa plays soccer in a jersey that renders redundant the giant O HAI I'M A GURL sign the Fed would clearly prefer.

What, US Soccer, the holy hell is this? I muddled through the men's World Cup this past summer and those godawful 1950s throwback jerseys with the knowledge that at least the women's side wore sharp-looking shirts. Well, I'm glad the Fed jumped right on it and brought that nonsense to a stop. The clean lines are gone. Now we have weird wraparound piping that makes Wambach et al. look like they're tied into those awkward kimono things you put on before getting your highlights touched up.

The upside is that the level of fug almost keeps me from being annoyed that you can't buy these things anywhere--but, of course, the official US Soccer store will still sell you any permutation of the men's kit you can think of, as well as a Freddy Adu hero t-shirt, just in case anyone's left who still thinks they guy has a future. Or maybe they're banking on people confusing him with actual starter Maurice Edu and buying up all the stock before they have to put it in remainders.

Anyway. The women go at it again on Saturday night against Guatemala, and the match is being streamed on the CONCACAF website, kimonos and all, so give it a look and see what you think. I think I don't like it.