A few days ago I took a break from the interminable parent information sessions accompanying new student orientation at my son's university and spent an hour wandering the grounds and gardens on campus, getting to know the cool-and-mist-loving Pacific Northwest flowers and trees that are new to me. One flower in particular caught my eye, a stand of tall stalks topped with spiky balls in varying stages of bloom that shimmered purple. 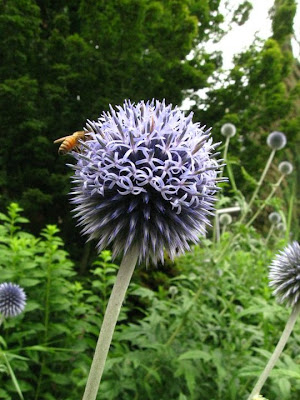 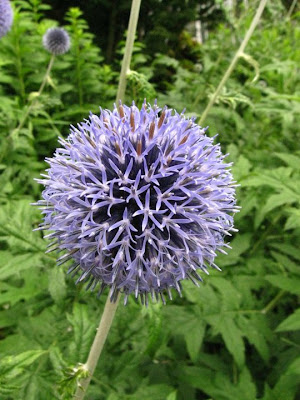 "They're wonderful, aren't they?" came a voice behind me. I turned to see an elderly man who I had not met, but whose crooked-toothed, lopsided grin was familiar.

He told me the plants were called globe thistles, and, chagrined, I glanced down at the thorn-tipped leaves and spiky stalks and said Oh, of course, a thistle, I should have looked at the foliage. These aren't like the thistles I grew up with. He smiled and told me about the globe thistles in his back yard, how they used to be covered with bees every summer, but that he hadn't seen a single bee this year and was worried that the hive had died or moved on. He asked where I was from and asked questions about saguaros and their flowers, and after a pause regarded the thistles again. "They're so fascinating, how different they look at different times. See these new ones that are all spiky and silver with a purple glow, and then these that have bloomed and are covered in almost a periwinkle?"

Yeah, I said, and then inside they have such a deep purple at the base of the blooms. Really striking. He leaned closer to a flower, examining it, and said, "You know, you're right. I'd never noticed that before. Nature is so wonderful when you take a moment to stop and just look at it. You'll always see something new," and I heard his words in his soft, measured voice and looked at his kind, gauzy eyes and gentle smile, and on that cool, overcast day a thousand miles from home I saw my grandfather again.

He wished me a good rest of my visit, I wished him luck with his bees, and he continued on to wherever he was walking. It was a good day.

that's beautiful! thanks for sharing.