I am back from the dead, roused from all-consuming ennui by yet another new uniform design from US Soccer. For the first time in US soccer history, the men and women will be wearing the same jerseys, they said. Saints be praised, I said. If the nurse uniforms are history, I'm happy, I said, envisioning both Deuce and Baby Horse sporting some sleek, clean, classy threads.

Then they actually released photos, and my brain went *poof* again. 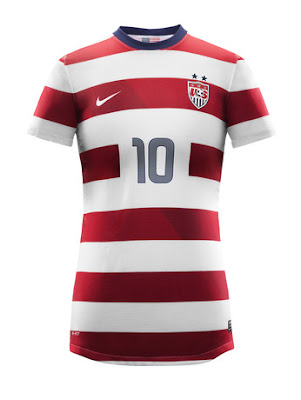 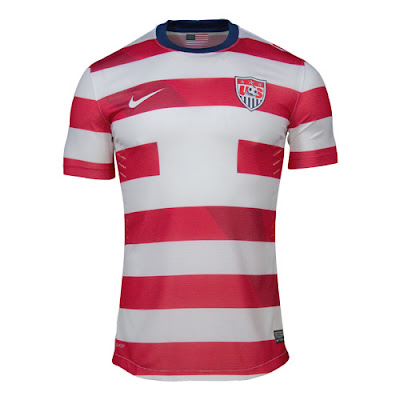 The one on top is the women's shirt. Leaving aside, for the moment, the facts that (1) no post-adolescent woman willingly puts herself into wide horizontal stripes because (2) they make her look like an overgrown ten-year-old boy unless (3) she's a giant lesbian who says fuck it, I enjoy looking like a growth hormone-addled barber pole (*waving hand* but not for $149, I don't think), I see a big problem here. Look at the two pictures again and see what's different between them, aside from the marginally visible boobs in the one on top.

When two uniforms are slightly different, we look at the unifying elements for the message of what is official US capital-S Soccer. What do they share? Giant hoops, check. US Soccer crest, check. Sublimated sash, che... wait, what? Yes. Both shirts have a faint diagonal sash running from upper right to lower left (although it looks more like a laundry accident on the home shirts, it's boldly black on the away version). The sash, of course, was introduced to the last iteration of the men's kit to commemorate the 1950 US team that managed to beat England 1-0 in a first-round World Cup match, which was the last US World Cup win until 1994 (and its last qualification until 1990).

Okay, that was a big deal, a ragtag group of scruffy Americans beating the Brits at their own game, although it can't help but also be a tale of nearly a half-century of futility. But whatever. Yay 1950, fair enough. So since both teams are wearing the YAY 1950 sash, they surely must both be wearing something to commemorate the women's team's decades of domination, including two World Cup championships and three Olympic gold medals, right? Perhaps the traditional two stars above the crest, one for each World Cup trophy, just like the Brazilian women wear five stars for their men's side's WC championships?

Ah, no. Checking the pictures very carefully, it appears that they do not. So the official design suite for United States soccer is hoops, a crest, a swoosh, and a sash that's a smudge on one shirt and funereal on the other (black in mourning for the U23 men's failure to make it out of CONCACAF and into the Olympics, perhaps) because we need to remember that the men's team won a game once, in 1950. The women can put stars on their own shirts, but the men don't need to be bothered with them. Because if they had stars, someone might think they were wearing the women's jersey, and that would just be wrong.

Probably not the best photo the Tribune could have chosen to go with the caption.

Oh, I am in a mood. Slap alerts currently in effect:

* The first person on any comment thread dealing with contraception who either links to the video or merely posts "Every sperm is sacred." It was hilarious in the movie. It was kinda funny the first time someone said it re: personhood amendments/Catholic healthcare. Do you think you're being hilarious now that you are approximately the 5288236239021th genius to lay that lick in the comments? You are not.

* Anyone anywhere who busts out with a howl about war on religion. You fuckers just got the president to cave to a pack of bishops on contraceptive coverage (call it a compromise, call it an end run; the White House still wavered and ended up doing something different than the completely reasonable thing they said they were going to do in the first place). If there's a war here it sure as fuck isn't against conservative Christianity.

Wasn't I going to breathe deeply?
No comments:

The incomprehensible retrograde we've spun ourselves into is... driving me to such distraction. That is the polite turn of phrase my senior year Brit Lit teacher inadvertently taught us to use in lieu of I am ready to leap across this desk and fucking rip your throat out and feed it to shrews and then stomp on the shrews and jam them up your sorry, sorry bunghole. Goodness me, look at that emotion. Rick Santorum is correct; I am far too unstable to be trusted with, say, an M249 SAW or something similar that I might unload on someone's medieval, misogynistic ass when they get huffy about contributing a few pennies in payroll deductions toward medical care for a co-worker's ladybits.

I could go on. Some deep breathing would be a better idea.
No comments:

The Catholic Church is bleating again (still? it's not like they ever truly stop) about their business ventures' health plans being forced to cover contraception under the new federal rules. When these Catholic hospitals and social service outfits start just as loudly grousing about having to extend spousal benefits to employees who were not married in the Church, or--heaven forfend--have been divorced and then remarried, well, then we can talk.

Komen reversed itself yesterday, sort of, and with that amazing backflip managed to piss off the anti-choicers who had been so elated not 24 hours before. Then late yesterday we learned that Ari Fleischer was the architect of the anti-Planned-Parenthood job search that put Karen Handel in as policy director and ultimately led to the fun events of last week. This blew a delightful new hole in Komen's protest that they never designed any policy shift to exclude Planned Parenthood--Planned who, now? Never heard of them!--and promises to keep the outrage party rocking.

I am so glad that I have always loathed pink.
No comments:

Some time ago I resolved to write every day, or near enough to every day as I could muster. That may have been a month ago.

Arizona provides no shortage of topics, of course, and if Arizona happens to oversleep on the odd Tuesday the rest of the nation reliably pitches in. What has our state legislature dreamed up over the past 72 hours? Bible classes in public schools. Carrying concealed weapons on college campuses. Defining the start of life as the moment an egg gets smacked by a wayward sperm. The week before that? Banning both Mexican-American studies and any books that might have been used in its classes. Oh, and our esteemed governor thought it was a good idea to wag her finger in the face of that black guy who had the nerve to ACORN his way into the White House, from Kenya, with Saul Alinsky. And Mexicans. Or something.

Beyond the borders, the loathsome Komen foundation took a break from suing the pants off anyone who used the color pink without permission to pull grants from Planned Parenthood, because OMG abortion and Jesus, which prompted a few god-botherers to say well bless your hearts; get back to us when you've pulled the plug on stem cell research too.

In the world of sports, the WPS finally imploded into a giant ball of Dan Borislow-fueled WTF. While many players tweeted their shock and sadness, many more--specifically, the national team players last seen in magicJack shirts--were strangely silent. Then Ella Masar dropped this bomb and the giant ball morphed into HOLY FUCKING SHIT WHAT THE FLYING FUCK ARGH ARGH ARGH GAAAAAAAAAAAAHHHHHH, and every ounce of goodwill I had managed to work back up for Wambach evaporated like a drop of spit on, I don't know, the surface of the fucking sun or something.

Yes. I am 44 years old. I am old enough to know better than to have human heroes. But I do anyway, and I expect some semblance of social graces from them, and when they are shown to act like even bigger asswipes than the general population, I take it hard. Who's left? Krieger, I suppose, although she is having her ACL stapled back together as I type. The ball? Maybe I can root for the ball.

What is good in the world at this moment? Last weekend I went to a surprise birthday party for one of my friends, and spent a lovely evening chatting with people I've worked with forever but don't seem to find the time to talk to very often. That was good. Other than that? World, you are on notice.
1 comment:

Yesterday was the one-year anniversary of the shootings at the Safeway.

I dreamed last night that I was Bradley Manning's court-appointed... well, hand-holder, I guess, and he was delivered to me in a large dog crate in a shopping cart, wasted and broken from umpteen months of solitary confinement. Nobody seemed to notice when I pulled him out of the crate and carried him around the warehouse like a baby, rocking him to make him stop crying. He weighed as much as a kitten. Finally a large staff sergeant in old-school woodland BDUs saw us and made me put Manning back in his crate, and wheeled him away.

Not sure what that was all about.
No comments:

Goal One has been met, thankfully, since it was something along the lines of Get Rid of this Fucking Headache Already. Still coughing like a three-pack-a-day sixty year old, but since this is the first day in more than a week that I have not felt like absolute fucking roadkill, I'm marking that one done.

Goal Two probably involves not freaking out about stuff that will not be helped one bit by said freakout.

Goal Four, if there's time after that: regain cardio fitness and upper-body strength without re-trashing the knees and elbow, all three of which spent 2011 in a state of major malfunction.

In other words, the usual. Oh, and to write every day. Is that five? I'm counting five. Best hop to it, then.
No comments: