Wow. Well played, Cindy McCain. Well played. You totally got me with your appearance on that NOH8 video, where you took the brave step of calling out your dickhead husband's position on Don't Ask Don't Tell as a major contributing factor to an atmosphere that leads gay kids to off themselves. I mean, I was really impressed. We've all seen Walnuts blow a fuse or two, and since probability dictates that you two have a one-in-eight chance of randomly ending up at the same house at the same time somewhere down the road, we figured you were setting yourself up for some unpleasant interactions with the hubby but still spoke out for what was right anyway, just because it was the right thing to do.

Seriously, you totally had me going, so, wow, the lulz are totally on me this morning when I see this: 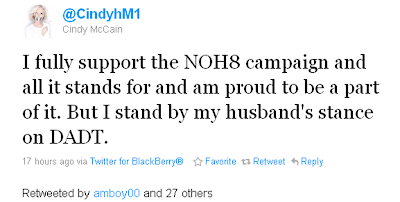 I just hope your husband didn't call you "cunt" too many times in whatever little discussion led to your tweet yesterday. Later, Cindy. It was nice while it lasted. Enjoy the small private plane.

what hypocritical BS. She must be so proud. Grrrr......

But yet she still keeps up that profile picture. Where's the one with her under Johnny boy's arm??