Jury duty called earlier in the week, so I dutifully trundled downtown, sat in the cattlecall room for an hour, and promptly was dismissed for lunch. So I walked around a little, visited the Presidio, read the tiny signs posted along the timeline outside, stuck my head in at Old Town Artisans, choked on patchouli.

Many of the original buildings downtown were demolished in the 1970s in the name of urban renewal. Just enough cool old Sonoran rowhouse adobes remain to make you wonder what the place might have looked like if Tucson had been more interested in historic preservation than in horrible pebble-coated concrete panels. 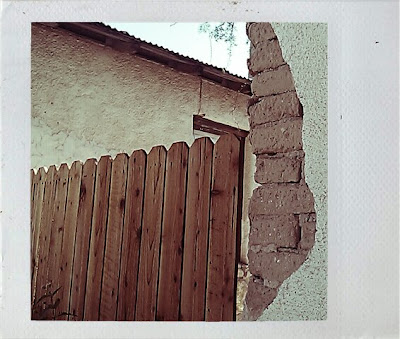 Adobe house at Washington and Court.

My company is often called on to keep an eye on street work in this area, since plenty of history is still around under the asphalt. Here is a utility alignment in the middle of Scott Avenue between Pennington and Alameda streets. 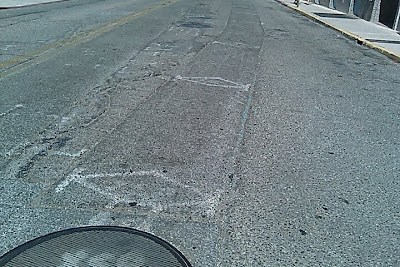 I monitored this one way back in 1996, watching a crew dig a trench and put in a new gas line. I found several bottles, part of a child’s tea set, and a Civil War-era US Army belt buckle. Pancho Villa’s Saturday night buckle, the gas company foreman laughed, and then he saw the little tea set and melted, gently holding the tiny teacup between his thumb and forefinger. 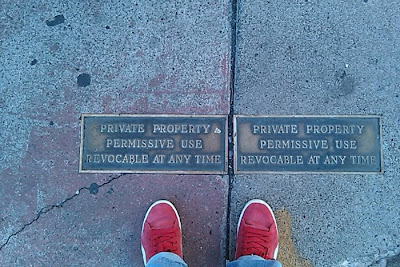 After the hour was up, I went back to the jury room and eventually up to a courtroom, where I was not selected to hear a child pornography case. The defendant looked like a standard-issue well-groomed, mid-60ish businessman; when I walked into the courtroom I had figured he’d been busted for embezzlement or tax fraud or something similarly highly financial. Uh, apparently not. I have never been so happy to not be picked for something. It has been hard enough to scrub just the names of the image files read out by the judge from my mind. I wonder how long the chosen jurors are going to have to see the actual pictures in their own memories.