I grew up in the heart of the Midwest, bouncing around various locales in Illinois and Indiana before moving out here to Tucson at the ripe old age of 27. As a kid I read every book I could find dealing with the tribes and leaders of the Great Plains. Stting Bull, Crazy Horse, Gall--I was all over those guys. But I had never been to the Black Hills before this trip. It was amazing and awesome to finally be in that country where everything had happened that I'd read about. I thought about visiting Wounded Knee, but in the end I didn't. I didn't want to look like just another wasichu gawking with a camera. So I ended up camping in a state park named after Custer. It was a trip of many contradictions; go figure. I played music from the Honor the Earth tour on the way, hoping it might take care of some karmic cleansing. Anyway... 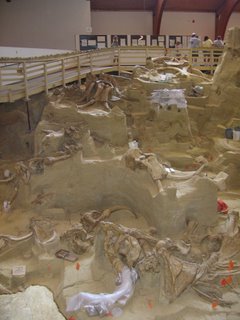 The first stop in South Dakota, if you're driving up from Colorado via friggin' eastern Wyoming, is the Hot Springs Mammoth Site. Back in the 1970s, workers who were clearing land for a housing development uncovered bones that proved to come from a mammoth. Indeed, they came from one of an assload of mammoths that had gotten stuck in a giant sinkhole several thousand years ago. Instead of saying, "Oh, that's nice," and bulldozing the whole thing, the good folks of Hot Springs agreed to preserve the site. It's currently protected by a large structure incorporating a museum. Excavations are ongoing, and the cool part is that you can take a tour through the sinkhole and see the many mammoth skeletons pedestaled on the sediments where they were found.
Interestingly, my girlfriend worked on the excavations there way back when the Mammoth Site was just a tarp over a hole in the ground. Her ex wrote many of the scholarly papers and books available for purchase in the gift shop, and his picture from back in the day is still on the wall next to the sinkhole.


From there we drove up into the Black Hills, to the unfortunately named Custer State Park. If you can get beyond the really wretched genocidal connotations, the park itself is magnificent. It's a huge swath of land encompassing several different elevational and ecological zones, including open grasslands, forested hills, streams, lakes, and stunning needle-like granite formations. Wildlife out the wazoo. 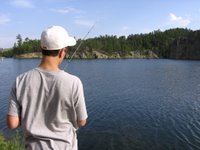 The fishing is allegedly fantastic. If by "fishing" you mean "drowning several pints of nightcrawlers in lovely but fish-free surroundings," then yes, the fishing IS fantastic. 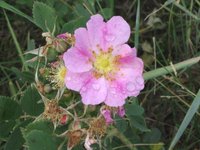 Wildflowers were a-bloomin' all over.


We went buffalo-ing in the park and in the town of Custer. The town versions are fiberglass and decorated by local artists, to be auctioned for charity later (as in the Cows on Parade in Chicago and other cities...). The real versions are huge, marvelous animals, with improbably mismatched front and back ends. 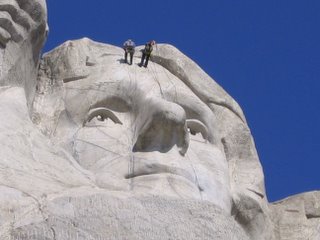 Custer is adjacent to Mt. Rushmore. Did I mention this was a trip of contradictions? If someone were to come out tomorrow and propose jackhammering a pristine mountaintop into a memorial to dead presidents, I would most likely be disgusted. Wellllllllllllll in any event, uh, I guess it's pretty impressive. We got the added bonus of being there for the first cleaning in the history of the monument. A German company that specializes in power-washing skyscrapers offered their services for free (and, I assume, for photo rights) to blast the lichens out of the boys' noses. Here two Grosskopfgebirgsbergsteigern make their way down Jefferson's forehead.