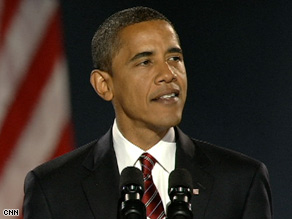 Wow. An electoral landslide and an electric rally in Chicago, and an acceptance speech that will be held as the gold standard for decades. The summing up of the speech via summing, through the eyes of 106-year-old Ann Nixon Cooper, the past century of America's responses to challenge, crisis, and injustice, was brilliant.

She was born just a generation past slavery; a time when there were no cars on the road or planes in the sky; when someone like her couldn't vote for two reasons -- because she was a woman and because of the color of her skin.

And tonight, I think about all that she's seen throughout her century in America -- the heartache and the hope; the struggle and the progress; the times we were told that we can't, and the people who pressed on with that American creed: Yes we can.

At a time when women's voices were silenced and their hopes dismissed, she lived to see them stand up and speak out and reach for the ballot. Yes we can.

When there was despair in the dust bowl and depression across the land, she saw a nation conquer fear itself with a New Deal, new jobs, a new sense of common purpose. Yes we can.

When the bombs fell on our harbor and tyranny threatened the world, she was there to witness a generation rise to greatness and a democracy was saved. Yes we can.

She was there for the buses in Montgomery, the hoses in Birmingham, a bridge in Selma, and a preacher from Atlanta who told a people that "We Shall Overcome." Yes we can.

A man touched down on the moon, a wall came down in Berlin, a world was connected by our own science and imagination.

And this year, in this election, she touched her finger to a screen, and cast her vote, because after 106 years in America, through the best of times and the darkest of hours, she knows how America can change.

The speech was a fitting bookend to John McCain's gracious and classy concession speech, which was itself a necessary prologue to Obama's words. McCain quickly shushed the crowd that booed in response to Obama's name, quickly and repeatedly and with growing exasperation until it sunk in and they went silent. Had he conducted his campaign with that level of dignity and measured reason, the outcome might well have been different. Let us hope that, with defeat, the straight-talking John McCain will re-emerge from the evangelical, uber-conservative-pandering pod person he turned into while on his presidential job interview, and will deliver on his promise to work with the new administration to fix the bushels of problems the country faces.

Obama called America to once again rise to the challenge, pitch in, sacrifice, work, and come together for a common good. That's not socialism, by the way, but simply the social contract required by a civilized society. We have been drowned out and shouted down by power-hungry ideologues for far too long. It's time to get to work.