Promotion of Vice and Prevention of Virtue, Part Next 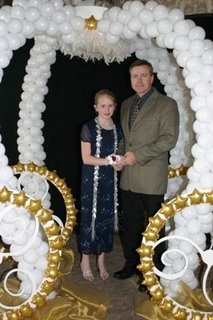 So, having written about the new parameters of the abstinence curriculum, I came across Digby's post on the Purity Ball--quite possibly the most unnerving manifestation of the movement I've yet seen. This event, recently held in South Dakota (courtesy of the Abstinence Clearinghouse), can pretty much be summed up as Ritualistic Surrender of My Sexuality to Daddy. Girls don prom dresses to be escorted by their fathers to a Dominionist's wet dream of a formal dance where dad and daughter pose for prom-style pictures under a heart-shaped arch of balloons.

The highlight is the exchange of vows part of the program where girls and fathers read pledges to each other.

I pledge to remain sexually pure...until the day I give myself as a wedding gift to my husband. ... I know that God requires this of me.. that he loves me. and that he will reward me for my faithfulness.

I, (daughter’s name)’s father, choose before God to cover my daughter as her authority and protection in the area of purity. I will be pure in my own life as a man, husband and father. I will be a man of integrity and accountability as I lead, guide and pray over my daughter and as the high priest in my home. This covering will be used by God to influence generations to come.

(Let's review. This event is pushed by an organization that is deeply involved in providing

sex ed abstinence curricula to schools. The highlight of the event has both parties involved invoking God. Please, if anyone tries to argue to you that abstinence is based on sound science and pursued in service of public health rather than proselytizing, please please please knock them upside the head. But I digress.)

With this creepy little ritual, the girl surrenders her sexuality to the protection and control of, first, her father, and second, to her future husband. She frames herself as an object to be given as a "gift" to a presumably unknown man in the future, a gift that will only be of worth if she has eschewed all sexual activity (apparently at any level of stimulation; see my previous post) beforehand. The father's place as not only the temporal head of the household, and not just the spiritual head, but the freakin' "high priest," is cemented. Trip-trap over to the Clearinghouse's website and look at the pictures. Many of the girls making these vows to father and God look to be barely out of the single digits, with likely only the faintest glimmer of recognition of what the script they're reading is really talking about.

The people who poo-poo the notion that abortion restrictions and abstinence movements are, at their cores, solely about controlling women's sexuality need to take a very close look at the laws and bizarre rituals growing out of those movements and try to come up with compelling arguments supporting their positions. They need to explain why there are no parallel rituals prescribing male purity prior to marriage, why females are being targeted not only as the commodity to be protected from sexual sullying but also, contradictorily, the very source of sexual pollution if left uncontrolled and unchecked by paternal intervention (thus the mindset manifested in the MO legislature's refusal to fund birth control for low-income women, on the grounds that it would lead to promiscuity).

What does the Purity Ball imply about the mother's role in her daughter's growth and development? How, exactly, is the father to "cover" his daughter in authority when it comes to matters of sex? If a purity pledge girl does engage in pre-marital sexual stimulation, what punishments befall her due to her violation of this added layer of accountability, not simply the God of Leviticus and St. Paul but now Daddy the High Priest as well?

Makes you wonder why there aren't any mother-son purity balls. O never mind, you don't have to tell me why...