[UPDATED FOR WWC 2011] Hello, Abby Wambach girlfriend/ boyfriend Googlers! This is a vintage post from the 2007 World Cup, but please do enjoy it and feel free to knock around the blog for other soccer- and wambach-tagged tidbits. Oh yeah, the answer to your question is Sarah Huffman, and they have a bulldog together. This is fairly common knowledge among followers of the WNT and WPS, so I don't think I'm compromising anyone's privacy by repeating it here.

If you hadn't noticed, with the World Cup a mere eleven days away, this blog is turning into All Soccer All The Damn Time. Maybe I'll gnash teeth over The Surge later on today, or talk about Larry Craig--it makes me sad more than anything, really--but for now, a picture from the WNT blog: 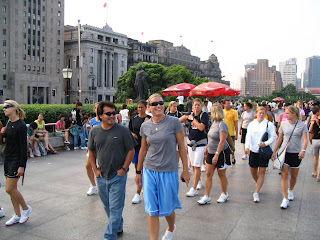 Abby is NOT a dyke, What a hateful thing to say about her. Not only is it not true but you obviously didn't even look at the picture you posted of her.. the guy she is walking beside is her long time boyfriend.

Mmm, not hateful at all, actually, but quite positive. **amended to say: actually, it's a neutral statement offered to explain the Fed's apparent fucked up marketing decisions. It can be construed as hateful if you're not comfortable with gay people or positive if you're hoping for a kick-ass role model.** This part remains unamended: Whatevs.

I don't have a problem with gay people, If someone wants to be gay then thats their decision, I don't care one way or the other. But I don't like people throwing labels on other's and you calling Abby a dyke when you don't even know if she is or not is rude.

Anoymous, why don't you just shut the fuck up? Thank you, I will now enjoy the silence.

Hate me if ya'll want to but the fact remains that the picture you posted is of Abby with her boyfriend, She's NOT a dyke.

While I strongly dislike the public discussion of anyone's sexuality, I dislike inaccuracy almost as much. The person walking beside Abby is assistant coach Bret Hall and if he IS her boyfriend (which he isn't) there's a huge conflict of interest there.

Not sure I agree about the conflict of interest thing,I mean who would want Abby and the team to succeed more than her boyfriend??? Also this entire discussion began when the author of this blog..Boltgirl. Refered to Abby as a dyke in a earlier post.

anonymous, you obviously don't realize that, to lesbians, the word "dyke" is not a bad word! It's a word reclaimed and used with affection.

Also, you must not realize that there is NO way a coach on a National Team would be involved romantically with a player.

If you want to know the identity of Abby's girlfriend, it's not that hard to figure out.

if that person is who abby is dating then that acl injury must have really taken a toll on their appearance...poor girl =P

Who cares what Abby's sexual orientation is? Is it really anybody's business? If she is gay, it does not make her any less of a person.

so... whether she is or isn't a lesbian. this guy you speak of does not seem like he would really be her type. regardless. just an observation though. I may be totally wrong.

yes she is a lesbian! everyone knows it! sarah huffman she chose to be his girlfriend!

Thank you again for your flawless service, and I look forward to working with you in the future.