Och, there's nae time for cryin', lassie. Not when Sarah Palin keeps on flappin' her yap.

I am, in my own, state, I have voted along with the vast majority of Alaskans who had the opportunity to vote to amend our Constitution defining marriage as between one man and one woman. I wish on a federal level that that's where we would go because I don't support gay marriage. I'm not going to be out there judging individuals, sitting in a seat of judgment telling what they can and can't do, should and should not do...

Except, you know, for when I am.

It was so much fun to be in uber-conservative Mesa over the weekend, which is similarly full of people who would never judge a fellow sinner or tell them what they can and can't do, except for doing "get married," of course, because that doesn't count as judgment or anything, and see giant, jaunty Yes! on 102 signs at every major intersection and smaller signs in people's yards and even smaller bumper stickers on their Escalades. Bracing, really.

The only bright spot in the miasma of despair that trip wrought on my normally sunny disposition is that at least one person out there took the time to do what I only fantasized about: 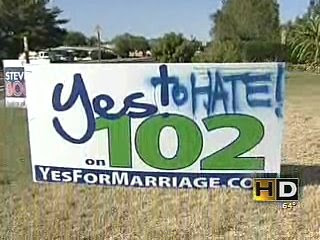