You're Not Paranoid if They're Really Out to Get You

By now you've probably heard about the Mormon memo, which starkly illustrates both the depth of the animosity toward gay people and the frighteningly patient long-term planning that has gone into the effort to relegate us to underclass status for ever and ever, world without end. If you haven't heard about it, the memo dates to 1997, when it was spurred by Hawaii's short-lived movement toward marriage equality, and outlines the Mormon strategy to prevent or rescind marriage equality--homosexual legal marriage, or "H.L.M." in LDS parlance; we have not seen such an affinity for acronyms in a grievously long time--wherever it might pop up, anywhere in the nation.

For at least eleven years the LDS has been plotting and planning, to borrow a phrase, the best way to eliminate civil rights from a group that had never done anything to the Mormons more offensive than simply existing. A couple things stand out here for me. First is the recognized need for the Mormon church to coattail with the much higher profile (at that time, at least) Catholic church on anti-gay activism. The second might seem like a throwaway bullet point, but it might be the most disheartening snippet in the entire memo for me. 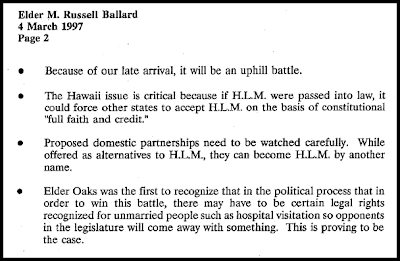 That last bullet: "...in order to win this battle, there may have to be certain legal rights recognized for unmarried people such as hospital visitation so opponents in the legislature will come away with something." In other words, in order to take the big important rights away from the faggots and dykes we might need to cave and let them see each other in the hospital, but Xenu knows that if we could get away with it, we'd eliminate that right too. Hospital fucking visitation. It's been my own personal whipping boy, the reductio ad hospitalum bandied about by people who might not reduce our relationships to a sex act but most definitely are happy to reduce the huge sphere of marital rights and responsibilities to the single issue of ICU access. And now we learn that it's the fucking shriveled little carrot the Mormons grudglingly consent to dangle in front of us even as they prepare to whack us with the stick.

Kiss my giant lesbian ass, Mormon church. You forfeited any claim on my civility when you decided to launch a crusade to strip me and mine of full citizenship in this country.