Happy Christmas, Papa Ratzi! Does the Vatican Daily Hat subscribe to the AP feed? If so, you may have noticed an interesting story this morning that probably qualifies as stunning, ground-breaking news to you despite falling squarely in the middle of No Shit, Sherlock-Land for most of the rest of us.

Young gay people whose parents or guardians responded negatively when they revealed their sexual orientation were more likely to attempt suicide, experience severe depression and use drugs than those whose families accepted the information, according to a new study.

The way in which parents or guardians respond to a youth's sexual orientation profoundly influences the child's mental health as an adult, say researchers at San Francisco State University, whose findings appear in today's journal of the American Academy of Pediatrics.

Please note that the parents' response can only profoundly influence the child's adult mental health if said child survives into adulthood rather than taking an early exit in the face of impossible expectations from family and church. 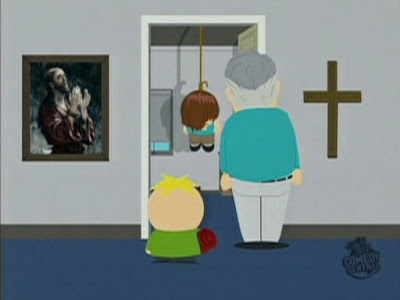 Not the optimal outcome.

So please give it a rest, Joe (Benny? which do you prefer?), and give parents the space to follow their instincts and be parents rather than parrots of your favorite intrinsically-disordered cracker line. You do not have kids. You do not even have sex, except possibly with that hot Italian secretary of yours who has undoubtedly ground his perfect teeth to nubbins from all the clenching of that perfect jaw that would be required to get anywhere near your icy cold nethers. So stuff a sock in it, already, and muse a little about what the Jewish guy with a beard really thought about things.

The new analysis of data from a large federal survey found that more than half of youths became sexually active before marriage regardless of whether they had taken a "virginity pledge," but that the percentage who took precautions against pregnancy or sexually transmitted diseases was 10 points lower for pledgers than for non-pledgers.

The pope has yet to comment on this, and projecting his scorecard is not the easiest task. Major minus: sex before marriage, minor plus: no birth control, major plus: at least they're doin' it with the opposite gender. So while Ratzi may give a slight edge to the purity ringers, reality scores things very differently.