Oh, for the Fuck of Fuck

The Daily Star's cartoonist earns his salary, I guess, by pissing off half the people half the time. This morning appears to be my turn. 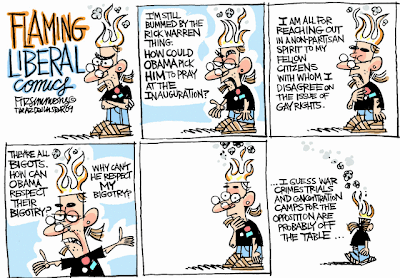 I wrote a letter in response, and am waiting breathless by the e-mail to see if they'll print it.

I am very disappointed to see Fitz (1/8/09) fall prey to the meme that having a negative reaction to discrimination against gay people is in itself bigotry, or that liberals are the most intolerant people in the world because they won't play along with other people's attempts to enshrine into civil law their aversion to people different from themselves. I completely disagree with the beliefs of people who voted for Prop 102 in Arizona and Prop 8 in California, but I do not, as a result, work tirelessly to strip them of certain civil rights. If I am "bigoted" against those who decided to legally declare me a second-class citizen (and who would gladly return to the days when it was legal to fire me or evict me) simply because of who I happened to fall in love with, I suppose I'm also bigoted against the KKK and Holocaust deniers.