It is still hotter than fuck in Tucson, but once the sun dips below the neighbor's hated salt cedars (wretched trees, but hey, they're shady), it's just barely tolerably not too hot to fire up the Char-Griller. The Char-Griller is one of the finest pieces of equipment ever invented and certainly the best thing to come out of Georgia since Jimmy Carter's post-presidential reinvention of self. 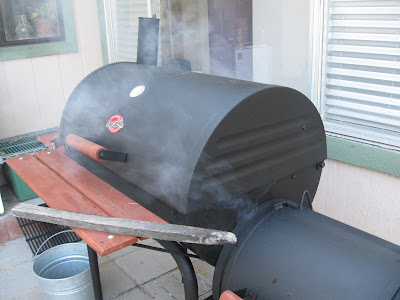 The conundrum this grill has posed for me in the 11 months I've owned it is how to efficiently exploit its, well, killer efficiency. Do up a couple steaks and a pile of chicken and a bushel of vegetables, close it up, and the damn thing is still registering at 250 a couple of hours later. Letting all those beautiful coals go to waste feels shameful. I've gotten over it in the past by wrapping up a roast in foil and setting it on the grate for a few hours, which works nicely, but tonight I found something more immediately satisfying, lack of leftovers be damned: fruit! Hot fruit! Hot grilled with just enough butter to keep it from sticking and just enough brown sugar to make it gooey fruit!

Make sure your coals are glowing at about 300-325 degrees. Locate some medium-ripe but reasonably firm bananas or peaches, preferably both. Slice in half, lengthwise for the bananas and however makes sense for the peaches. I used Saturn peaches, the little flat ones, and sliced them horizontally. Ditch the pits and banana peels, BTW. Lightly brush the cut sides with soft butter and sprinkle with brown sugar, and mush around to make a goo. Spray the grill grates with nonstick spray stuff and set the fruit on, butter-goo cut side up, and close the lid. After two minutes, flip the fruit to butter-goo side down, close the lid again, and grill two more minutes. Remove with a spatula, since the bananas will be soft, and chop and drop over vanilla ice cream.

The ice cream part is pure fantasy at this point, since I didn't have any on hand tonight, but it would have been nice. A touch of cinnamon or cardomom mixed with the sugar and butter would also be good, or maybe cayenne if you want to get all Southwesty on me.

Email ThisBlogThis!Share to TwitterShare to FacebookShare to Pinterest
Labels: food

once again, that sounds great! and of course i'd use cayenne, if only to teach my Aussie mates how to be "southwesty."

WOW, it is great of charcoal grill