Tim Tebow is going to be on TV on Super Bowl Sunday, which will likely be his last Super Bowl-related appearance unless he does something about the lisp and lands in a TV booth someday. No, he's not playing on the field--the draft isn't until April--but he'll be playing the missionary role that's become such a big part of the mythos that has been built up around the kid by people who are into that convert-the-natives sort of thing. Tebow will be appearing, with his mother, in an anti-choice advertisement produced by Focus on the Family.

... he's an unabashed pro-life supporter; his mother, Pam, was advised by her doctor late in Tebow's pregnancy to abort the baby because it was a dangerous pregnancy. Her refusal led to Tebow's compelling life -- and also to a 30-second Super Bowl commercial by Tebow and Pam (sponsored by Focus on the Family) that will add to Tebow-mania.

In the interest of fairness, I won't put words in the boy's mouth. This is what he said about why he's doing the commercial:

Pro-life is very important to me. My mother listened to God late in her pregnancy, and if she had listened to others and terminated me, obviously I wouldn't be here. If others don't have the same belief, it's OK. I understand. But I hope they respect that at least I have the courage to stand up for what I believe in.

Okay. Timmy, maybe you understand--and possibly even respect--that other people have sincerely held opinions on this that differ from your own. But if you're really approaching this with the live-and-let-live attitude your quote appears to be trying to portray--and if you are as cognizant of the "choice" element in "choose life" as you should be, given the personal history you're flogging here--you should know better than to do your witnessing for full-term pregnancy under the banner of James Dobson, who most assuredly doesn't think "it's OK" that other people don't have the same belief. Because, if you hadn't noticed, Focus on the Family spends an inordinate amount of time and money working to make sure that no American woman has a choice to exercise about pregnancy ever again. Otherwise, you're pulling a Palin and repeatedly referencing a choice that was made by a woman to insist that women should not be allowed to make choices. Encourage women to make the same choice your mom did? Mmm, considering she went against medical advice and endangered her own life and the well-being of the four kids she already had, I'm not sure that's the best thing to be encouraging, but hey, I'm all about free choice under informed consent, so go for it. Lend your face and boner-prompting among the evangelical set to an organization that will use your image to further their attempt to eliminate reproductive freedom? Shove that shizz up your ass, sideways.

Related issues include CBS' decision to approve airtime for this, when they've refused politically/cultural war-ly charged ads in the past (notably, the 2004 UCC spots supporting marriage equality), as well as the just plain tackiness of letting politics/culture wars intrude on what is supposed to be the one national holiday we can all agree on, goddammit. 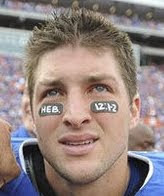 By the by, Tebow is fond of referencing Bible verses on his eyeblack. I'm sure the fact that he's never put MATT 6:5-6 under his eyes is just an oversight.

dammit, boltgirl! now I'm going to have to dig out my bible and look up that reference.