Back in the saddle, three spreadsheets open and bucking and snorting as I shovel data into them, utterly disregarding the inelegant clanging of mixed metaphors, hot on the trail of the secret lives of a few people who hung out on top of a hill outside Payson, Arizona about 1700 years ago and made a mess of things. These people were inveterate recyclers, resharpening just about everything they had down to a nub. This is highly unusual behavior for the geographic setting and time period, so I need to figure out what all was all up in they grillz to make them do that. That's my job. That, and replenishing the coffee pot. 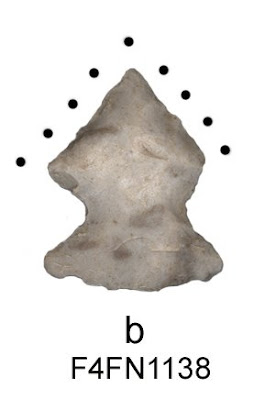 In completely unrelated news, the Emmys managed to top the previous edition of Completely Pointless and Stupid Format Tweaking we last saw when an awards show made a big hoo-hah of being In The Round, as it was uttered breathlessly and repeatedly, although "in the round" in that context simply meant "maintaining the same two-camera format despite half the audience being seated behind your mark." Cutting edge, that. Anyway. To top that, last night's Emmys featured the Worst! Idea! Ever! by being hosted by five reality show hosts, simultaneously and painfully unscripted. When both Ryan Seacrest and Tom Bergeron fidget and look distinctly uncomfortable, you know you have a serious dog. And I thought Howie Mandel creeped me out before. Holy shit. Uh, yeah, so I guess some people won awards and stuff. I didn't pay a lot of attention since more and more of the nominees are for things I can't see since I don't have HBO. I did see the bit at the beginning with Ricky Gervais and Steve Carell, which was howlingly funny and should have earned both of them another Emmy on the spot.

Science! Such is the joy of archaeology: when we feel our own lives and times are meaningless, chaotic, and without structure, we can pour our energies into elucidating the lives of those long past...which might just be revealed to make more sense (all things considered) than ours!