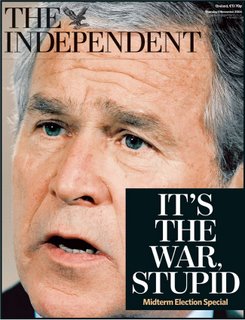 I remember waking up on the morning after the 1994 election in a daze,
processing that the sun was still coming up and the sky was still blue,
but that the country I had known before was completely different.
Twelve years after the advent of the Contract On With America, I am in a different daze, hardly daring to believe that we actually won and have the opportunity to change things back to some semblance of decency.

It's so nice to know that most of Europe is celebrating with us, although Der Spiegel sounds the cautionary note that the Dems may be looking for greater European involvement in resolving both Iraq and Afghanistan.

In other news, I stopped by Albertson's on the way to work to pick up celebratory donuts. As I was leaving I saw a big old Dodge pickup pull into the handicapped spot. The driver hopped out, popped his tailgate down, and... pulled an Albertson's shopping cart out of the truck and carefully wheeled it into the cart corral.

I'll take my signs and portents where I can find them. Perhaps it is a new day in America.