Went to the Pederson rally last night here in Tucson with 8,000 of my closest friends. And Bill Clinton. 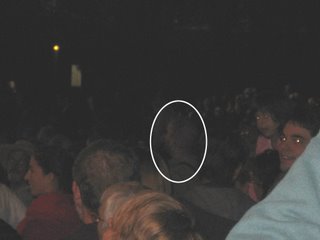 If you look closely, you can see Homer's head. His picture of me came out slightly better.
I arrived in time to catch Raul Grijalva (CD-7). He is not the most fiery speaker, but his passion speaks for itself in his legislative record and his relations with his consituents. About a year ago I sent him an email expressing my concerns about the rapid erosion of civil rights and due process under the Bush adminstration, and got a three-page (!) letter back from his office detailing his thinking about each issue I'd talked about. Even if the Mustachioed One himself had nothing to do with it, he at least has the sense to hire responsive people who know how to write.

Raul was accompanied by Gabby Giffords (leading the race to take Jim Kolbe's vacated CD-8 seat); they apparently drew time-killing duty while waiting for the Big Man to appear. They called out various candidates and officeholders they saw in the audience, asked us to hold up our cellphones, did everything short of a singalong until the motorcade arrived.

I must say it was electrifying watching SUV after SUV and cop car after cop car procede past the police tape to the back of the bandshell. They introduced Governor Janet Napolitano, but all three of the headliners decided to come onstage together--Napolitano, Jim Pederson, and Bill Clinton hisself. I had never seen Clinton in person before. It was awesome even from a hundred yards away.

Janet led off. I realized I'd never seen her either in a setting where she could sorta cut loose--when she gets revved up she sounds remarkably like Milhous--and she was pretty funny, did a good job whipping up the crowd. Which is a good thing, as it provided just enough energy for us to get through Pederson's stultifying speech and still be awake for the main attraction.

Clinton was awesome. He is the finest impromptu speaker to have held that office since JFK, and nobody on the horizon comes close. I so wish I'd taken a video of the part of his talk that matter-of-factly slammed the Republican meme that they're the only party that should be voted for. "They'll tell you Democrats will tax you into the poorhouse, and on the way to the poorhouse you'll pass a terrorist on every street corner, and with every step you'll trip over an illegal immigrant." It was a well-presented message on the need for national unity and also the need to get out the vote and swing the undecideds in our favor. 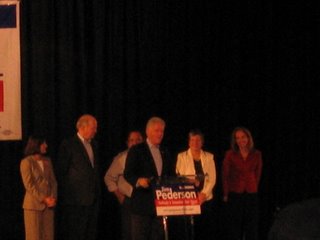 Blurry Pederson, Clinton, Napolitano, Giffords.
Get out the vote!