First, a confession. I did not put up my altar in the library plaza on Saturday, mainly because when I got down there it looked like it would be one of maybe three or four altars. That and what I was afraid looked like childish exuberance in my design cracked my personal embarrassment threshold, so like a woo I strolled around the plaza a few times among the myriad urban hunter-gatherers and then fled.

I wasn't going to leave Tom hanging, though, so I went ahead and constructed the altar in my back yard under a rising full moon. 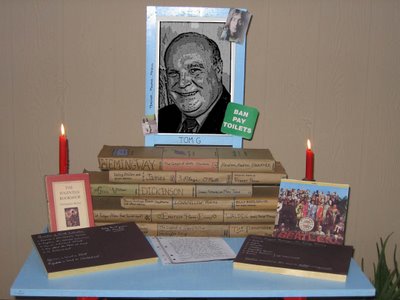 Tom Gerencher, English Department, St. Joseph's High School, South Bend, Indiana
I decided it looked pretty okay after all. The original ban pay toilets sign hung on his classroom wall over the left side of the chalkboard. I stared at it every day. The tiny blackboards in the foreground contain Five Qualities of Great Literature and Seven Support Techniques for Essay Writing, all burned into my brain. Later that night I went to the Icecats game, where the usual pregame bangin' eighties metal music was replaced, briefly, with Beatles tunes. I took it as a sign that he liked my altar and was happy to be honored in a cozy backyard spot under the silver moon.

Maybe next year I will recruit a contingent of friends to build a flotilla of altars so no one's is left conspicuously alone. Um, I think I'll save the stack of faux wood books for next year, if anyone would like to join me. Anyway.

The Boy and I stopped at Grill for a pre-procession dinner (spinach ravioli in herbed pink sauce for me) and then wandered over in front of Hotel Congress to wait. Surreal sight #1 of the night was watching three otherwise prim 60-ish ladies sway and groove to the fuckfuckMOTHERFUCKERFUCKTHATFUCKFUCK rap music blasting out of a Club Congress soundcheck.

Then came the procession itself, which is a half-mile long exercise in surreality. The beginning is always almost overwhelming to me, with the first giant puppets followed by a crush of black-clad people in skeleton makeup surging curb to curb, drums and incense and bells, people dancing, people waving skulls, coming and coming. 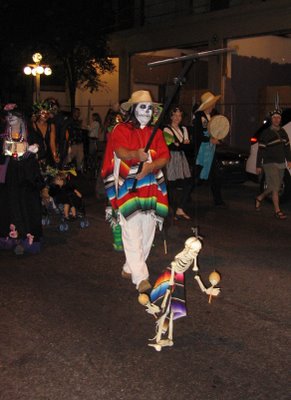 This person had a little mini-me skeleton marionette with skull maracas. 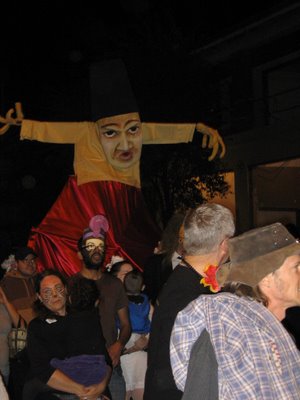 There were many wonderful giant puppets. This one spun round and round. 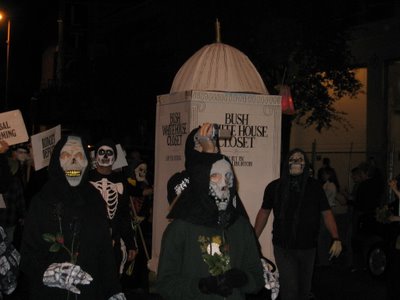 Plenty of political statements as well, including coffins labeled "Bill of Rights" and "Constitution." These nice people handed out leaflets reminding us to vote.

This is rapidly becoming my favorite community event. It's amazing being in a space with so many people simply letting go and putting themselves so totally into it.

My friend and I (both St. Joe class of '96) are trying to remember Mr. Gerencher's Seven Support Techniques...

Can you send them? melissa.c.simmons@gmail.com