And to think all it took was 20 minutes on the phone with Dell tech support. The pleasant and very patient fellow sitting somewhere in India walked me through a few different attempts to get a workable wireless network key, and at the end asked me to stay on the line to take a survey telling his corporate masters how well he performed for me. "Thank you for taking the survey," he said, "and when they ask, my name is Earl." *blink blink* Okay. Thank you, Earl. 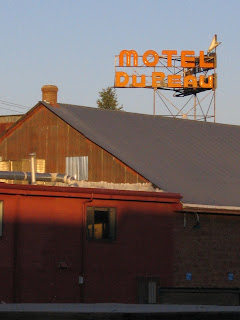 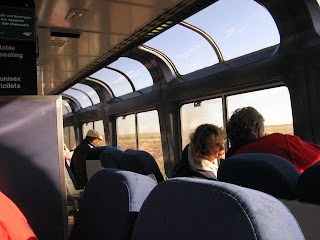 We spent most of the train ride here in the lounge car, which is graced with comfortable seats, tables, and windows that wrap up onto the ceiling. Just down the stairs is a snack bar staffed by Shirley, who cheerfully dishes out the coffee and doesn't skip a beat when you order a Heineken at six in the morning, asking only if you'd like a little bucket of ice for your bottle. 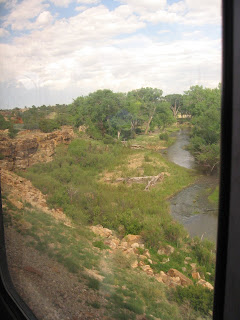 Surprisingly good photo opportunity from the lounge car, near the New Mexico-Colorado border.

Our fellow passengers were good-natured and friendly until the last few hours of the trip, when we ran into a couple that was still very friendly despite being in the process of ripping each others' throats out.

Bill: Wake up.
Rose: (sprawled in an apparent drunken stupor)
Bill: Wake up. I bought you a hot dog.
Rose: (silently re-wrapping hot dog and slamming it onto Bill's fold-out tray table)
Bill: That's ten dollars worth of food there.
Rose: I DON'T WANT A FUCKING HOT DOG, BILL.
Bill: There you go. You dishonor me by not eating this hot dog and Pepsi. It cost me ten dollars.
Rose: STOP IT, BILL. JUST FUCKING STOP IT.
Bill: I told you if you raise your voice to me we're through. Now you're raising your voice to me on a train. You are not coming home with me.
Rose: SHUT THE FUCK UP, BILL. YOU'RE DRUNK.
Bill: I am not drunk. I only had four shots this morning. You're the one who's drunk.
Rose: STOP IT, BILL. I'VE BEEN ASLEEP THIS WHOLE TIME. GO BACK TO THE FUCKING BAR.
Bill: ( deeply wounded, sniffling). You wake up mean, Rose. You wake up mean and then have to let everyone on this train know it. I only bought you a hot dog and now you raise your voice.
Rose: WILL YOU SHUT UP ABOUT THE FUCKING HOT DOG?

Yeah, round about this point we went back to the lounge car. When we returned to our seats a couple of hours later, Rose and Bill were giggling and affectionate, surrounded by hot dog wrappers.

Bill: Hey, you see those big wind turbines out there? Isn't that cool?
My son: Uh, yeah.