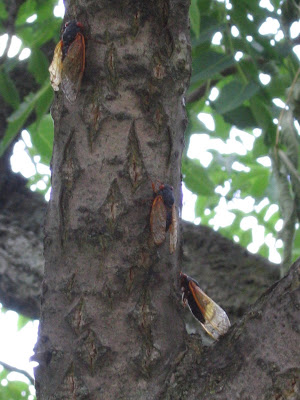 Sunday morning I decided it was time to seek out the 17-year-olds of Cicada Brood XIII in person. I have a long and complicated relationship with these bugs, although most of it revolves around the hideously large, plump, and green annual version. As a wee child in southern Illinois I would be out on a fine summer afternoon, minding my own business, climbing a tree, when crunch, my hand would come down on a shed exoskeleton stuck on a branch. Or I would be skipping barefoot down the sidewalk and crunchsquish, would tromp on top of a dead or dying bug.

It's a history filled mostly with intense heebie-jeebies.

I know cicadas are utterly harmless. I appreciate their interesting life cycle. I chuckle at the consternation hordes of them are able to produce in rational human beings, myself included. None of that stopped me from even beginning to resent the catalpa trees in my hometown since they seemed to be a particular favorite congregating place for the little bastards.

Anyway. Sunday afternoon we were off to the Morton Arboretum in the western suburbs, since we heard the cicadas were there in pretty impressive numbers. "Pretty impressive" may be accurate if it can be construed to mean "holy fucking shit" times about a million. Cicadas flying through the air. Cicadas buzzing around trees like bees around the snowcone booth at the county fair.

The visuals were nice. But the audio portion of the presentation was mind-blowing. We could hear them through closed car windows driving the city streets on our way to the arboretum, at least when the car slowed down. Actually on the grounds, the sound was much louder. And then we parked to hike into the woods a bit, where it was louder still, growing louder and louder the deeper into the trees we walked. Maybe a quarter of a mile in the sound was absolutely punishing on the ears, a steady pulsing background sound topped with a second song that rose and fell as hundreds of thousands of bugs vibrated their abdominal membranes in unison. I have never experienced anything like it.

Back at the arboretum visitor center, I grabbed a "Cicada 2007" t-shirt and took it to the nice older lady at the cash register. As I reached down into my bag to get my wallet, I noticed a cicada on my shirt, crawling on my right boob, and took great pride in not yelling or flapping around. I calmly flicked the bug off, not viciously, I didn't think, just, uh, forcefully enough for it to land about ten feet away. The old lady sighed sadly, "Ohhh..." I thought about apologizing, but did I mention it was on my boob? So I just shrugged and handed her my debit card, you know, the one with my undeniably female first and middle names printed on it, and she recovered and finished the transaction, smiled, handed me my stuff, and said, "Have a nice day, sir."

Despite the gender confusion, Morton Arboretum is highly recommended, with 1,700 acres of trees and plants from different parts of the world, lovely loop roads to drive, and maybe three times that amount of trails to walk through the woods and around lakes. There is a children's garden and a nifty hedge/evergreen maze to get lost in, and the details of all of it are very nicely done.

Hiya boltgirl - I always used to get the Peppermint Patty treatment, too. "Stop calling me sir!" Thanks for the book recommendation, and don't tackle Wright unless you're feeling particularly robust.