Wednesday marked the great pilgrimage to beloved landmarks--both of my former life in Chicago and the boy's fond mental images of the place. First, a stop for sustenance at Buffalo Joe's in Evanston. 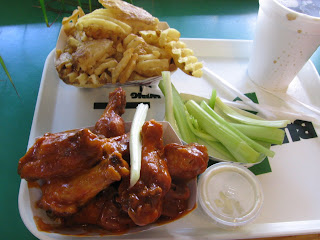 The wings are perfection. Wash 'em down with waffle-cut fries and forget about the drink since it's impossible to pick up your cup due to the sauce slopped all over your fingers--the boy used his forearms--and spend the rest of the day catching sweet whiffs of hot, buttery, vinegary, peppery heaven wafting up from your hands, no matter how much soap you use afterwards.

Then I dragged the boy on a brief detour down memory lane, that being the two blocks down Sherman Avenue to Willard Residential College at Northwestern University, where I spent four beer-and-cards-soaked years. The hall was named after Frances Willard, dour founder of the Christian Women's Temperance Union. 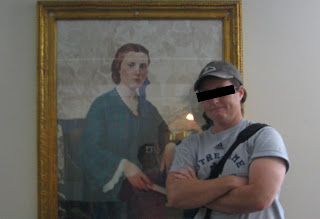 Boltgirl and the stern, sober, disappointed glare of Frances Willard.

Thence to Wrigleyville and the color and pageantry of interleague play. Cubs flags, fans, paraphernalia, and tourists everywhere. How strange to be on the tourist side of things after so many years of being one of the knuckleheads who lined up three hours before gametime to get into the bleachers. Of course, at that time the bleachers were five bucks a pop; face value now for premium dates is $35, and the scalpers working the Clark and Addison intersection were getting $60 per bleacher ticket. Whatever. I parked my pride and pulled out my camera like the rest of the yahoos from Iowa and other suburbs. 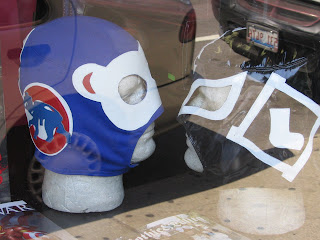 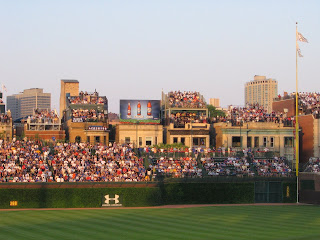 If you click on the photo to see the large version, you'll notice two cryptic signs on the rooftop to the left of the Miller Lite billboard: Eamus Catulii and ACO036198. The numbers are a reference to the number of years since the last division title (03), last NL championship (61), and last World Series title (98). Given that, I expected "eamus catulii" to be Latin for "we're out of patience" or "how can any team suck so bad for so long," but it actually means "let's go Cubs."

We met up with my two best friends from high school (thanks for the tickets!) and settled into the best seats I've had at Wrigley in a long while, terrace box on the third base line. The six-dollar beers went down smoothly, the dogs had just the right snap, and we had a nice little reunion on Ernie Banks Day at the ballpark. In the end, the Cubs managed to pull out a one-run victory (winning a one-run game is a major miracle this season), with a strong performance from starting pitcher Sean Marshall and a closeout by Ryan Dempster, who actually looked like a major-league closer rather than somebody's drunk brother-in-law, and we happily shuffled out of the park with 40,000 other relieved people singing "Go Cubs Go" in full throat.