The highlight of yesterday's US-Italy Confederations Cup match was that Gennaro Gattuso kept his pants on for a change. 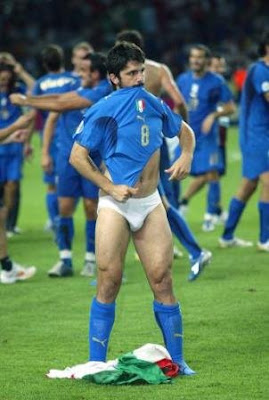 What we didn't have to see yesterday.

Unfortunately, we did have to see Tim Howard sprawling helplessly three times as an Italy shot found the back of the net, after a WPSesque red card to Ricardo Clark left the US a man down for the last 60 minutes. Perhaps Bradley should have gone to his bench earlier, say round about the 60th minute, to replace guys like Feilhaber who had been clearly suffering for a long time. I do not like Donovan very much, but props to him for probably the best conditioning on the US side and sending three beautiful balls to open teammates in front of the net who failed to put them away.

Brazil should be interesting, in a bloodbathian sort of way.

Email ThisBlogThis!Share to TwitterShare to FacebookShare to Pinterest
Labels: soccer