This is where the adventure really began for me the last time I was up this way, after 24 near-solid hours of driving, when I pulled off the historic Columbia River highway at La Tourelle Falls for oatmeal, tea, and tipple of bourbon on a cold gray late December morning. This time around promises to be very different, with a summertime view replacing the fat snowflakes that started in earnest by the time I hit Multnomah, and the company of my boy being far better than flying solo.

Damage report so far: one smashed shin (courtesy of a post in a campground on the Redwood Highway) and one squashed thumb (incurred next to the Umpqua River while splitting firewood off an old stump that retained much more spring than anticipated; still numb three days later).

About that Redwood Highway: damn. The Avenue of the Giants--actually an old stretch of 101 before it was realigned--is a 31-mile alternate route running along Highway 101 from Phillipsville to Pepperwood that cuts through virgin stands of Coast Redwoods. Ignore the clusters of kitsch that have sprung up in small communities around some of the groves (does anyone really need a ten-foot Bullwinkle chainsawed out of a giant tree trunk?) and spend an hour trundling along the road at the bases of the biggest trees on the planet. You've probably seen pictures of the big redwoods, but they cannot compare to seeing them with your own eyes, standing next to a trunk that's bigger than your kitchen. I felt like a hobbit. The deep, deep shade, the quiet, the realization that I did not know what the needles on the trees looked like because they were too far up for me to see them, and trying to comprehend the two thousand years of time some of them have spent slowly growing up, up, up into the sky while entire civilizations have risen and fallen and the trees haven't noticed at all... that's awe-inducing like little else. 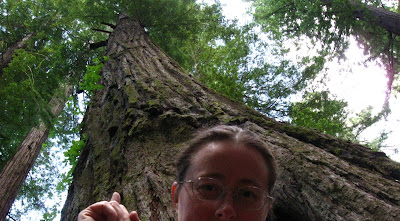 Driving through Oregon on I-5 is a lot like driving through parts of southern Illinois and Indiana, albeit with big hills on the horizon and a lot more conifers. Farms, barns, small towns with beat-up sloping curbs and grass growing out of the cracks and tractors holding up traffic. It is familiar and soothing. I wonder sometimes at my tendency to see new places through the lens of what I already know, evaluating them by their goodness-of-fit with the familiar. Wondering at the perpetual longing for home.

Portland itself is pretty okay. This is the city many people in Tucson point to as a model for what Tucson should strive to become, and really, who wouldn't want that kind of celebration of cultural diversity, historic preservation, green zones, a river walk, and arguably the best public transportation system in the country? I'm not sure how Tucson gets over the stumbling block of a river that doesn't actually have water in it, though, not counting summer monsoon runoff and effluent from the sewer plant. But! We are busily laying track for the new streetcar, which is modeled on Portland's but will unfortunately run on a limited and somewhat puzzling route (the hospital? really?). I hope our streetcar comes with cop car-style bumpers or, alternately, wonder how much it costs to fix streetcars that will inevitably be rear-ended, sideswiped, t-boned, or smashed from the front. They're going to be sharing the street with Tucson traffic, after all.

Today, the Confederations Cup final and Chinatown, possibly with a side trip to Powell's. And the blissful disconnection from the world will continue for another few days.