Near the end of the epic road trip over the summer, I hit the small town my family is from, a place I lived full-time until the age of 9 and spent summers in thereafter, the place I got married and baptized my kid, the place that is probably "home" more than any other. My dad's mother is the only immediate relative still living there; the rest of us departed for points west of the Continental Divide years ago.

Well, it wasn't really the end of the trip, but it was the turning-around point. Something about it being the culmination of the discovery phase, knowing that from that time on it wouldn't be a road trip so much as a long drive home, somehow made me irritable, made me feel rushed, kept me from spending the time I would have liked poking around for old memories. But it was early August, so the feel of summer there in southern Illinois was as familiar as ever.

When I was a kid, summer meant being in the place I considered home, afternoons and evenings spent at my grandparents' house--the yellow house with black shutters and white trim--playing in their wooded cathedral of a back yard. Hearing the smack of the screen door against the doorframe. Catching the scent of the fresh lemons in the ceramic fruit stand on the kitchen table as I walked through the Dutch door, the top of which was always open in the summertime. Watching and smelling the chicken or hamburgers cooking on the grill, always taking way too long for my dad's comfort level, but not mattering to me at all because it was summertime and I was running and playing inside and outside and had my grandparents and father with me and I was home and wrapped in the balmy blanket of a midwestern midsummer afternoon. 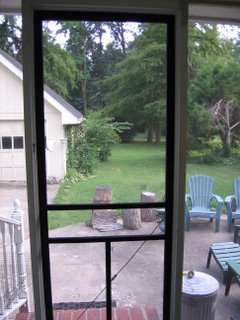 Evening meant hearing the soft call of the hoot-owl at dusk and Grandma fretting about the owl because he ate the baby squirrels. I was noncommittal, never having actually seen the hoot-owl, much less any baby squirrels, but my sympathies leaned toward the hoot-owl because I could at least hear his call and hearing it meant I was home and it was summertime and night was falling and the fireflies would be coming out soon.

Night meant escaping the sultry summer heat by going to bed in Grandma's attic, feeling the heat and humidity climb with each step up the (originally bare wood, later carpeted) steep enclosed staircase, trying not to fall backward while reaching up and fumbling in the dark for the loose door handle, and finally pushing the door open to the upstairs bedroom. Lying in the pitch blackness in the big soft bed, cold air from the window air conditioner blasting down onto my head, its droning whirr drowning out most of the sounds from outside. Hearing the train whistle, first in the distance but growing progressively closer, feeling the deep reverberation of the diesel engines as they roared past, and hoping I would fall asleep before the rhythmic clacking and rumbling of the cars on the track beyond the back yard faded into the distance.

Morning meant coming downstairs to the already-warm kitchen and the smell of pancakes frying in butter and homemade syrup bubbling on the stove, and choking down the orange juice that I never liked but that they always offered anyway, knowing it was pointless to decline, the sourness of the juice on my tongue making the first bite of sweet pancake a mouth-twisting sensation. I don't remember now if Grandma and Grandpa ever actually sat down and ate breakfast too. They bustled between stove and table in their aprons, making sure everyone else was fed.

All of these things exist now only in my memories. My grandfather spent the last two years of his life in a nursing home in a different town, existing in a different time when he was cognizant of anything at all. My grandmother stayed with him, all of her energies, thoughts, and dreams chained to the moment. Now he is in a cemetery in a different town, the place where Grandma grew up, a place I don't know at all. The yellow house has been repainted a cream color with dark blue shutters, and is rapidly falling into disrepair. It's too much for a lone 88-year-old woman and her cat to deal with. There will be no more barbecues in the back yard, or croquet games, or grandchildren running down the brick steps and across the long grassy lawn to the back fence to watch the train thunder by.

It was strange to be in the house with Grandma the only person there. When I was a kid, it was unusual to find the place unpopulated; the house of my memories teems with both grandparents, assorted family members, family friends, the dog. I found myself wandering around the silent rooms unconsciously waiting for Grandpa to get home, for my brothers to come crashing through the door, for the simultaneous conversations and kitchen noise to resume. The silence and space were unnatural, felt wrong. She plans to live until 92. The house and its sounds and smells await the next family. I wonder if they will devote even a fleeting thought to us, who lived and knew life within its walls and under its trees.