The triple-A Tucson Sidewinders played their last game ever last night, ending 40 years of minor-league baseball in Tucson with a whimper, so it was perhaps inevitable that mascot Sandy Sidewinder would end up in the median at Speedway and Campbell this evening. My son adored Sandy when he was a tyke, and was heartbroken to see the depths to which the poor snake has been reduced. 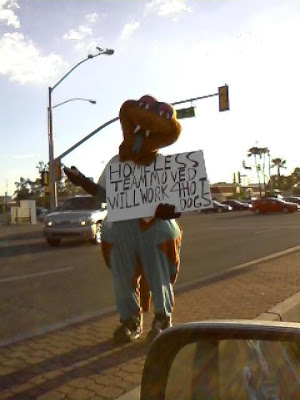 Another down on his luck out of work mascot.

Finally freed from the constraints of ballpark mascot decorum, Sandy chatted up the drivers in the turn lane as he wandered up and down, clutching his sign and a banana. I took the photo at 6:00; he said he'd been out there since five and couldn't believe the cops hadn't run him off yet. I asked if he might have a shot at being the Tucson Toro when the independent Golden League comes to town next summer, and he said maybe if he's lucky. At least he got to keep the snake suit.